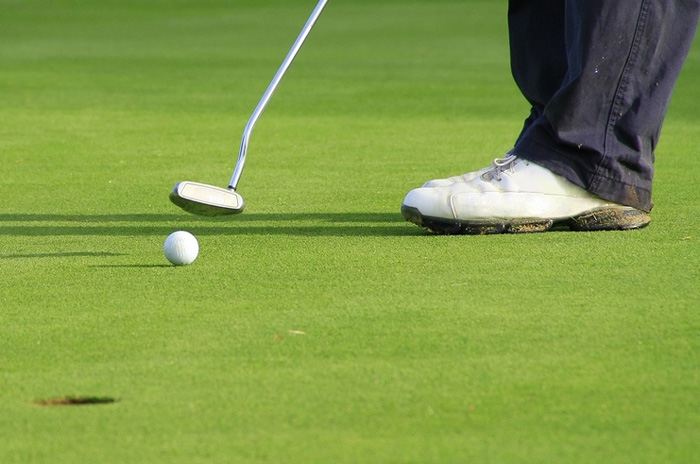 “Tiger Woods is the greatest putter of all time because he makes the ones he should and the ones he shouldn’t.” So wrote Golf magazine instruction editor David DeNunzio in a 2009 article in which he rated Woods the best putter in golf history, ahead of fellow legends Jack Nicklaus, Ben Crenshaw, and Bobby Jones.

“Woods isn’t as technical as some players,” noted DeNunzio, but “his setup is fundamentally perfect with everything square, especially his forearms and the putter shaft … . When your setup is this good, you’re going to make a lot of putts.” Naturally, a smooth-as-silk putting stroke and countless hours of practice have also contributed greatly to Tiger’s success.

A lesser-known but equally important factor in Woods’ extended run of dominance has been his mental strength, a part of his game he developed with the help of sports psychologists and hypnotherapists. Woods’ mental fortitude has long been most evident on the green, where golfers are most likely to fold under pressure. As I’m sure you know, it’s easy to remain calm and steady on the practice green; it’s not so easy when you need to sink a birdie putt to win your local Best Ball tournament – or in Tiger’s case, to send a U.S. Open to a playoff.

It’s easy to forget now – as ongoing back pain and multiple knee and back surgeries have compromised his ability to compete – but Tiger won 14 major tournaments by the time he was in his early thirties and once seemed a lock to break Jack Nicklaus’ record of 18 ‘major’ wins. I don’t think it’s a stretch to say that Tiger’s dominance was as much mental as it was physical. A study by Jennifer Brown of Northwestern University revealed that over an eight-year period from 1999-2006, other PGA Tour pros scored 0.8 shots higher in tournaments in which Woods was playing, as compared to tournaments in which he did not appear. Even more notable, the magnitude of the performance drop experienced by Woods’ competitors increased as they rose on the leader board, leading Brown to refer to this phenomenon as the “superstar effect.”

A careful observer will recognize that current world No. 1 Jason Day also uses mental training to his advantage, training that no doubt contributed to five first-place finishes in 2015, including the PGA Championship at Whistling Straits this past August.

Of course, I’m not suggesting that hypnotherapy or other mental training is going to make you play golf at a professional level. But it can help you maximize your own natural abilities and keep any internal or external pressures from compromising your game. For one, it enables you to better transfer how you play in practice to how you play on the course. How? By emphasizing the importance of your pre-shot routine and using an “anchor” to connect with the hypnosis, thereby helping you block out any distractions and release any anxiety. I also help you create a mental picture of every shot, because by visualizing yourself sinking, say, a 12-foot birdie putt, you set your subconscious up for success – both now and in the future.

If you’d like to learn more about how hypnotherapy can help you improve your putting stroke and get more enjoyment from the game, the first step is to arrange a free consultation. Whether you schedule an in-person consult at my office in downtown Charleston or arrange for a session via phone or Skype, the benefits of hypnotherapy are waiting to be discovered. Call 843-252-0573 or contact me at Hillary@truehypnosis.com to get started today.

Golf Is About What You Do Between Shots